Although to this day DWM members would probably say that they prefer vinyl, they also embraced many other recorded mediums, including cassettes, MP3s, reel to reels, and of course, CDs. At first, DWM released both vinyl and CDs on Musical Tragedies, until Marginal Talent was formed for experimental music, and, later, both MissmanagemenT and Mirran Threat specifically for DWM. But until then, DWM still managed a few CD releases on Musical Tragedies, a label that is today mostly known for the early releases of bands such as JBO and Donald Dark. 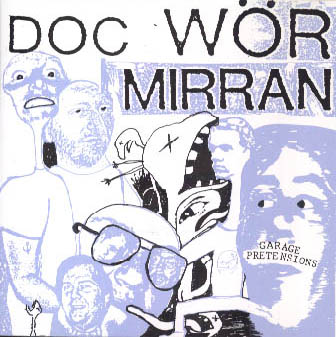 A milestone for DWM, this EP was their first ever CD release, and also the only release ever to come out on two different formats. In keeping with their tradition of featuring famous friends, this release includes the talents of two members of M. Walking On The Water, Markus Jansen and Axel Ruhland, as well as the recorded debut of the two SubPop Records owners Bruce Pavitt and Jonathan Poneman (reading a poem for Blake!). Also, on the vinyl version is a cartoon drawing of "Fat Freddy" by none other than Gilbert Shelton and Rip Off Press! Andy Martin of the Apostles/Unit drew the back comic. Other input from Joseph B. Raimond, Bernard H. Worrick, Peter Schuster, Ralf Lexis, Denise Kusiak, Andropovski, Rich Ferguson, Emil Beaulieau, Adrian Gormley, John Eberly, Bob Bolish, Frank Abendroth, Allen Shain, Artur Bandalan and .mario. Both formats include a 12 page booklet. The CD has a blue and black cover, the vinyl a light green and black cover and is pressed on yellow and blue striped vinyl. Some of the singles were prepared with special hand copied covers, some of which were copied onto gold sticker paper and others onto grey paper, and yet others have been copied backwards !500 singles pressed and 700 CDs. 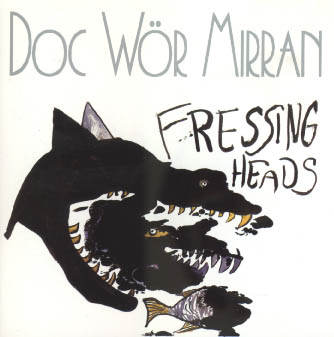 Some bands tour to support a new release. Not DWM! They exhibit paintings for a new release! This CD was released to coincide with a showing of paintings and drawings from the "Plop Art" series of works by Joseph B. Raimond, shown at Galerie Nord in Nuernberg, from Febraury 26th through March 24th, 1994. All cover art from the CD comes from this series of works and were part of the exhibition. Full color cover throughout. A much better mix of one song from the Garage Pretensions project is again released here, and features Axel Ruhland and Mike Pelzo of M. Walking On The Water. Other outstanding performances by John Griffith as well as Antje Haensel from the Merlons. One track, recorded with John Mervin in 1983 in San Francisco, and released on the very first ever MT release "Numb Tongue, No Taste" is rereleased here with a new vocal track. More song and vocal oriented than many DWM releases, which usually tend to be more experimental, instrumental affairs, this was the first major release recorded and released after the departure of Bernard H. Worrick. Other performances included Joseph B. Raimond, Ralf Lexis, Peter Schuster, Andropovski, Theodor T. ThrongoMob, Frank Abendroth, Oliver Van Essenberg, Peter Kern and Michael Shulz-Pernice. A limited edition of 50 copies was produced that included a second non playable, hand painted and numbered CD. An interesting footnote: several copies were misspressed by the manufacturer with Reggae music instead!