San Francisco, early 1980s: Bernard H. Worrick and Joseph B. Raimond are sitting in a small apartment, drinking shitty American beer, talking about the good old days in Germany, and listening to the Doors. Bernard comes up with the name "Doc Wör Mirran". Soon after, Bernard joins the Army and moves to Nürnberg, Germany, while Joe sticks it out in SF a few more years to finish his degree in art at San Francisco State University. While studying there, he took several semesters of a class devoted to electronic music. The first DWM release reflected his desire to release these recordings to the world. eMpTy Records was formed to release this first recording of DWM. That first cassette was actually intended to be just a one-off project, and at the time, no plans for any further tapes or activites were planned! It was after Joe just by coincidence also landed in Nürnberg that he and Bernard decided to keep the DWM ball rolling.... The following three releases feature music recorded while in San Francisco. 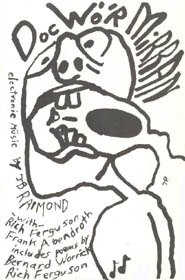 The very first ever DWM release, this sixty minute cassette was released together with "Numb Tongues, No Taste" on December 20th, 1984. This tape was simply a collection of pieces recorded in the San Francisco State University electronic music class. After the semester ended, there were enough good pieces to fill a tape, and presto, there it was! The recording quality is not the best anymore, but it is still a very worthwhile piece. This one was the end of a very difficult learning process, as none of the members had any real recording skills or experience, and found the instructor in the class to be inept at best in demonstrating the equipment, so most of the work was done on a very trial and error method. This tape features several pieces from the old Buchla style synthesizers. Without keyboards, one simply connects with cables various components. What results is randomly generated sounds, which would play forever and always be different, until someone turned the system off. Some of the pieces on this tape were actually used as background music for the local University television station during the night. Most of the pieces by Joseph B. Raimond exclusively, Rich Ferguson played on a few tracks, and sounds recorded years earlier by Frank Abendroth appear as well. An extra sheet to be included with each tape was prepared and printed by Rich Ferguson, that included written material by him as well as Bernard H. Worrick. This tape was later remixed and partially re-recorded and released on MissmanagemenT as a CD on the 25th anniversary of the release of this tape.

The second release, around the time they started thinking of maybe using the band name further, and putting out more material than just one tape. Also recorded in San Francisco exclusively, this was later released when the label moved to Nürnberg, Germany. This 30 minute cassette release was mastermined by John Mervin, who also came up with the title (inspired by what he thought was one of the stupidest bands names he had ever heard of, "Sacharine Trust"), and parts of it were recorded at his home studio as well. Also features early material remixed (original versions now on the "Early Stuff" tape) featuring Bernard Worrick and Jeannette Raimond (now Gustavus). Rich Ferguson again on a few tracks. Each copy is numbered and has hand painted covers and labels.

The fifth DWM release, this was an extravaganza of the last unreleased San Francisco era tracks, as well as many of the very first recordings from the new "Two Car Garage" studio in Nürnberg, and as such can be seen as a bridge between the first DWM era, in San Francisco, and the beginnings of the work in Nürnberg where they had our own studio. Other recordings as well are featured, from Darmstadt Germany and Boston, USA, all packaged together in a nice video box. Musically, it ranges from classical to pop to industrial, and features the talents of Joseph B. Raimond, Bernard H. Worrick, John Mervin, Patricia, Theodor T. ThrongoMob, Klaus Lipke, Denise Kusiak, Rich Ferguson, and Ralf Lexis.