Many bands in the indie scene are known for being "signed" to one particular label. Think of the label, and you think of certain bands. Doc Wör Mirran, in its continuous attempt at circumventing the music industry however possible, has never signed a contract with a record label, nor bound themselves to a particular company in any way. Couple this fact with a love of the vinyl single format, and what you have is a band that has put out highly collected singles on various labels over the years. In fact, if it wasn't for digital formats, DWM would likely still be releasing one single after the other. Like all DWM 7" releases, these records come complete with open up covers and booklets stapled into the covers. 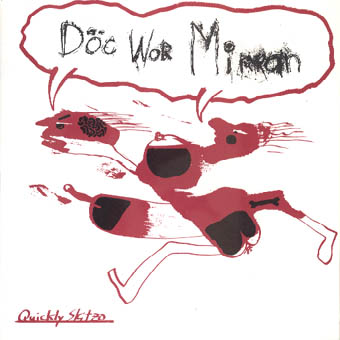 The first 7" on another label, this time on the great FE, a magazine and record label who have also released limited singles by Sonic Youth, Minutemen and Big Black, among others. Not in bad company, we think. This one probably should have been called "Doc Wör Mirran featuring Eric Hysteric", as Eric plays on every track. Eric is the leader of Der Durstige Mann, one of DWMs biggest influences, and it is an honor having him appear on this record. Some of the first batch of covers were lost, so the first set is crimson and black on white paper, with a 12 page booklet (b & w), the second set black and blue on white, no booklet. 600 pressed, in the USA. Featuring J.B. Raimond, E. Hysteric, B.H. Worrick, P. Schuster, Andropovski, Zoogz Rift, Matt McNeil, Jello Biafra, R. Lexis, Joe Red, J. Eberly, Sylvia Juncosa, F. Abendroth, Denise Kusiak, Deanne Kusiak, and Allen Shain. Released early 1992.

A great title, thought up by Andy Martin of the Apostles/Unit, for whom we thank. Released in a very limited edition of 300 copies in Holland in early 1992 on Korm Plastics, Frans De Waard's fine label for very experimental recordings. And experimental this is, consisting mostly of tape loops, samples and musique concrete, all bound together with DWM humour. Cover is a collaboration by Frans De Waard and J.B. Raimond, printed in crimson and black on tan paper. 12 page booklet, b & w, with two colored pictures pasted in. J.B. Raimond, B.H. Worrick, Frans De Waard, P. Schuster, R. Lexis, Denise Kusiak, A. Shain, Jeannette Gustavus, M. Wurzer, A. Gormley, F. Abendroth, J. Eberly and E. Beaulieau all contribute. 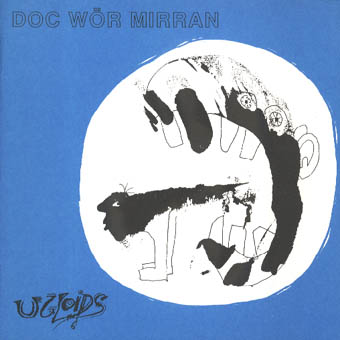 Described as "almost music", this is one of our more collectable releases, if only for the fact that it is on Sympathy, probably the most collected and respected of all labels speciallizing in 7"ers. Originally called "Screaming For Titties", this title was changed due to objections by the label's distributor, Mordam. (Of course, we gave this title later to our split saw- blade with Controlled Bleeding). We had thought that this record was going to be pressed on blue vinyl, but it ended up being on black anyway. Blue and black printed covers, 12 paged booklet printed black on white. 1200 pressed, in the USA. Released late 1992. Features J.B. Raimond, B.H. Worrick, R. Lexis, P. Schuster, Jeannette Gustavus (doing a great imitation of Grace Slick!), F. Abendroth, Andopovski, Theodor T.ThrongoMob, Matt McNeil, Denise and Deanne Kusiak, J. Mervin and A. Gormley.

This is probably the most frustrating of all DWM releases. Originally, this one was set to be released on Rigid Records in the USA. Covers were even printed for it, and all was set. Unfortunately, the label never pressed the record (even though they claimed that they had). Luckily, the fine folks at Frownland liked these songs, and although they were recorded years ago, still decided to release it. Cover art is the same, although the booklet is now a few pages shorter (8). The Rigid covers were black on tan paper and red and blue mixed on white paper, and have all been destroyed except for a few in our DWM archives. The new cover is black on grey paper, booklet black on white paper. Labels are black printing on white (check out the B-side design, the label's graphic guy scanned his own penis for it!!). Released December 1994, 1000 pressed, 200 of which are on white vinyl. Includes performances by J. Raimond, B. Worrick, J. Biafra, Denise and Deanne Kusiak, R. Lexis, P. Schuster, J. Eberly and A. Shain. German pressing.

The fifth single on another label, as well as the 51st (!) DWM release so far. The title of the record of course makes great fun of all those incredibly boring MTV unplugged recordings. This is more guitar oriented, dominated by Ralf Lexis songs. Recorded at both Lexisound and at Two Car Garage studios in 1993. Three songs in total, the second of which, Blisters Of Mercy, features Dick, Phil and Jasper of Citizen Fish/Subhumans, and we are happy to have them with us. Also appearing is Joseph B. Raimond, Peter Schuster (debuting on vocals, guess where!), Denise Kusiak, Ralf Lexis as we already mentioned, Jeandra Raimond who did the front cover lettering, Bernd De Payrebrune who did the great Albrecht Dürer art in the booklet, Jeannette Gustavus and Andropovski who wrote the poems in the booklet, and Bernd Spörl who helped title the songs. Cover, label (only one is printed!) and 8 page booklet are black and white printing. Also, this is the only DWM record where the inside of the cover is also printed, featuring a list of all the DWM members who are NOT on the recording (just like Crass used to do!). Vinyl is a great purple color. 500 made, released in December 1995. 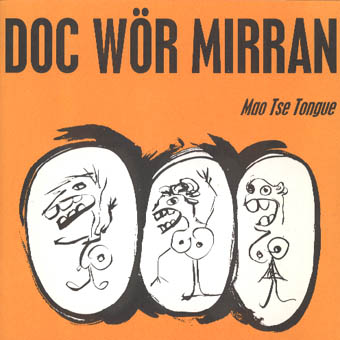 The sixth DWM single on another label, this time on Something Weird, a small label out of Iceland! This one is much more ambient in sound, and is almost strictly synthesizer music. Music by Joseph B. Raimond with a little help by Peter Schuster and Laurent Gabiot. The inside booklet is 8 pages of art from the Celebrate The Line series of drawings by Joseph B. Raimond drawn in Prague in November 1994. For each drawing is a corresponding poem, also by Joseph B. Raimond, denouncing the ills of our modern society in general, and the indie music scene in particular. Front cover is orange and black on grey paper. Black vinyl, 500 pressed, released December 30th, 1995. 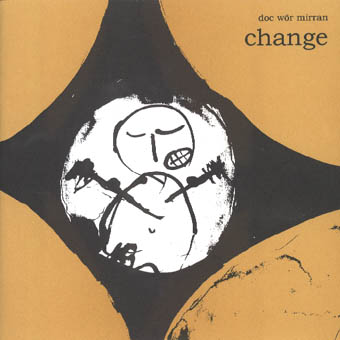