Many years ago, telephone answering machines often used the cassette format to record messages. Some of these were produced by the cassette manufacturers as endless cassettes, and they came in various lengths. Playable on only one side, they had a small plastic mechanism on the inside that pulled the tape out from the center of the right wheel back to the left side, resulting in an endless loop of tape. DWM took advantage of this idea and created the following three releases, each of which feature a three minute piece of music in an endless loop. Due to the format, all three feature experimental, musique concrete style pieces, and it is almost impossible to determine the exact place where the beginning and end of the track meet. Originally concepted as limited editions of 50 copies each, these tapes have not been produced for years, and have therefor unfortunately gone out of print before all 50 of each could be copied. 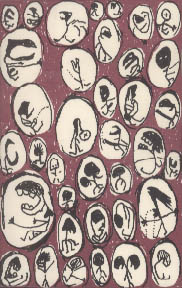 The very first endless tape ever to come out as a release on its own, this tape features music record by Joseph B. Raimond while still living in San Francisco, and is therefor a companion release to the cassettes listen on our early cassettes page. Poem by Bernard H. Worrick. Recorded in early 1984, this piece was the result of an assignment in a class for experimental music at San Francisco State University. 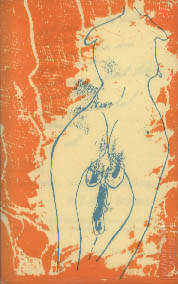 The second, and like the other two releases, featuring lots of cut up sounds and typical DWM strangeness. Recorded in the summer of 87 up through spring 1988, music by Joseph B. Raimond, Ralf Lexis, Peter Schuster, Denise Kusiak and Russ Spiegel. Very elaborate cover includes a blue printed cover on tan paperwof which a clear plastic with a design printed in orange emmulsion is stretched over the cover.

The third of the series, and the most "gothic" of the three. Sort of a concept piece, this one is about birth: specifically the birth of Jeandra Raimond, who herself has often contributed in various ways to DWM over the many years since. Cover art by Denise Kusiak and Joseph B. Raimond. Music by Joseph B. Raimond and Donna. Recorded around the end of 1987 at Two Car Garage Studios where the studio as still based in Nuernberg. Each cover is handmade with green spray paint on the card cover and cassette label.