In the first few years of the new century, Joseph B. Raimond began experimenting with his "Plop Art" style of working, and began a new series of Plop Arts that were small watercolor, ink and acrylic pictures painted onto the pages of the calender he keeps. These little pictures are then glued onto cardstock. Punk rock in graphic form, these pictures are controversial, social criticism that led one reviewer to comment that they are pictures even your psychologist wouldn't want to see. They have proven to be immensly popular, and have been shown in galleries around Europe, and unfortunately, many of the best and most controversial pictures have sold into private collections. However, before being lost forever, Raimond has carefully scanned each picture for release on the following CD-Rs. Each release features the entire Plop Art series painted in that year, burned onto a graphics only CD-R. Please note, there is no music at all on these releases. Each release comes with complete liner notes regarding the series of pictures, and, like all Hand-made releases, these CD-Rs feature full color printed covers and labels. For a taste of what is one these releases, please visit our e-gallery for a sample of some of the best. 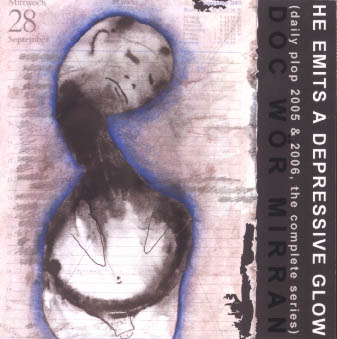 Is he depressed because he doesn't have hands? Could be. The second release in the series features a blue tray and contains the entire Daily Plop series from both 2005 and 2006, together on one disc, totaling 226 paintings. 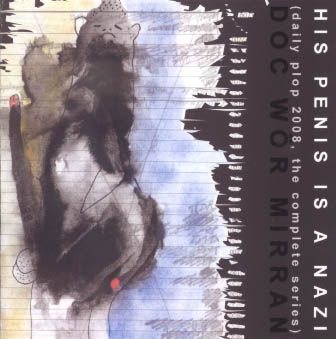 Title: His Penis Is A Nazi (daily plop 2008, the complete series)

He might not be a Nazi, but judging by the way his penis stands at attention, it sure looks like his genitals are! The third in the series contains all 139 pictures painted in the year 2008 and features a yellow tray. 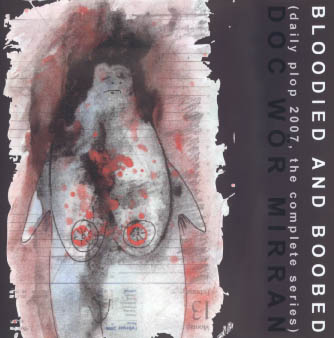 Somewhere in the world is a strange, lonely man who would see the woman depicted on the cover of this release as his dream woman! Lets hope we never have to meet him. Contains all 159 Daily Plop pictures painted in the year 2007 and is released in a red tray.