After the first DWM recordings at San Francisco State University, Joseph B. Raimond moved to the Nuernberg, Germany area in May 1985, where, just by coincidence, fellow DWM founder member Bernard H. Worrick was also living and working. The two then bought new recording equipment, which was to become the infamous "Two Car Garage Studios", and then began recording a huge body of work, much of it released on cassette on their own Masking Tapes and eMpTy Records, sublabels of MT Undertainment. All releases featured exclusive material, nicely printed covers and printed labels. Besides the releases on MT, also check out the DWM releases on other labels as well as the several cassette releases on fellow DWM member Peter Schuster's Prion. 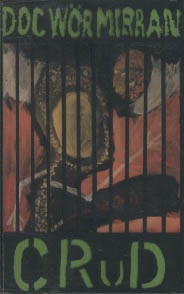 The title of this 30 minute tape stems from the nickname of the organization that Joseph B. Raimond worked for at the time it was recorded, CRD. Known for his distaste for full time employment, this found expression in much of the DWM work of the time. Judging from the cover, it is also no coincidence that the main CRD offices were housed in a former prison cell. How appropriate! One of the first recordings stemming from the new Two Car Garage Studios in Nuernberg, it features performances by Joseph B. Raimond, Ralf Lexis, Denise Kusiak, Klaus Lipke, Allen Shain, Dave Fanning, Fraulein Niemand and John Eberly. Limited edition of 120 copies. 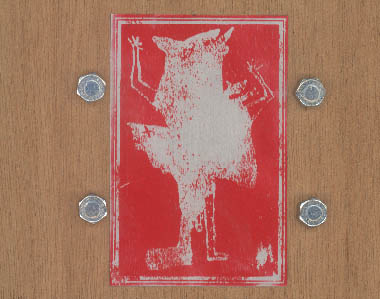 In an effort to out-do everyone in the field of cool packaging, the two thirty minutes tapes in this set are sandwiched between two pieces of wood, and all held together with two nuts and bolts that go through the wood and through the wheels of the tapes. Two inserts are glued into the insides of the wood pieces, and the artwork on the outside is a piece of photo-etched metal, some in red, some in blue. Musically, a very industrial affair, and features Joseph B. Raimond, Ralf Lexis, Denise Kusiak, Peter Schuster and Allen Shain. Limited edition of 100 copies.

Not a cassette at all, this "song" is recorded onto quarter inch tape, spooled onto a 3" reel to reel and inserted into a small envelope. Very industrial in nature, the music on this release is playable in any direction and at any speed, and, as was typical of this era of DWM, is dedicated to the fight against mind-numbing stupid employment. Sound sources by Joseph B. Raimond, Peter Schuster and Denise Kusiak. Limited edition of 11 copies. 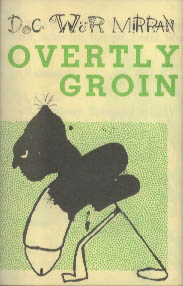 A very nicely done DWM tape, this 50 minute cassette has what must be one of the strangest of DWM titles. Several songs on this release, a bit with guitar, but overall much more experimental in nature, featuring Joseph B. Raimond, Bernard Worrick, Ralf Lexis, Peter Schuster, Theodor T. ThrongoMob, Dave Fanning, Denise Kusiak and Fraulein Niemand. 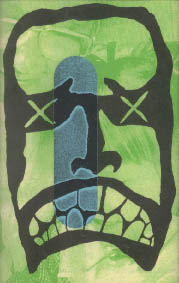 After a mild argument with jazz guitarist Theodor T. ThrongoMob at the main train station in Frankfurt during a cold winter day in 1988 on the nature of jazz music, Bernard H. Worrick and Joseph B. Raimond came up with this iconic title, which has sort of become a symbol for DWM's love/hate relationship with all things jazz ever since. One long piece here stretched over two sides of a thirty minute cassette, it starts off with a very basic guitar/bass/drums riff and slowly mutates into a raging industrial storm by the end of the first side. Side two continues with this mayhem before gradually coming back to the simple guitar riff. A nice project, featuring Joseph B. Raimond, Peter Schuster, Ralf Lexis, Michael Wurzer and Denise Kusiak. 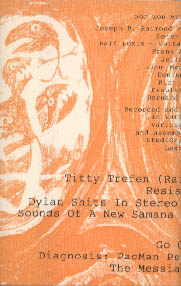 Sort of a collection of remixes and oldd songs that didn't fit onto other releases, running the musical spectrum between pop, rock, to noise. With participation of Joseph B. Raimond, Bernard Worrick (on graphics this time!), Peter Schuster, Ralf Lexis, Frank Abendroth, Jello Biafra, John Mervin, Denise Kusiak, Rich Ferguson and Fraulein Niemand. 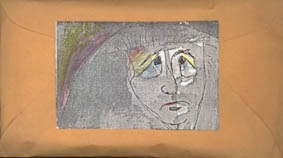 A bit different than most DWM releases, this one features music by Ralf Lexis and Denise Kusiak, recorded at Lexisound in Feucht, Germany. Cover by Joseph B. Raimond and Frank Abendroth, with some graphics by John Eberly. Comes in a brown envelope including a barf-bag. Hand colored black and white sticker cover. Edition of 80 copies. 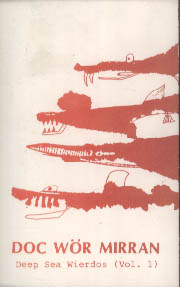 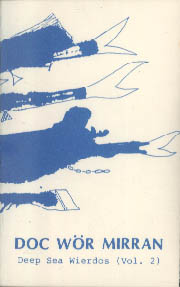 Instead of making one long, boring, C-60 cassette with four tracks, why not put out two thirty minute cassettes with one track per side? That is exaclty what DWM did on this double release, which also follows the tried and true DWM tradition of misspelled cassette titles. Each tape is a release in its own right though, with its own catalog number and cover, but only together can the complete cover be appreciated. More experimental, almost ambient, this tape of course contains parts one and two of "Deep Sea Wierdos", and features Joseph B. Raimond, Peter Schuster, Bernard H. Worrick and Michael Wurzer. By the way, on both releases some covers were printed black on light brown paper, others had red and blue blurred printing on white paper.

The second of the two C-30 tapes, this one contains the same format as the first part, but with parts three and four of "Deep Sea Wierdos", and again features Joseph B. Raimond, Peter Schuster, Bernard H. Worrick and Michael Wurzer. 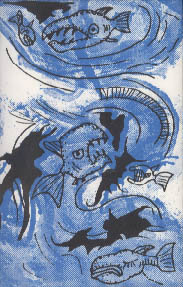 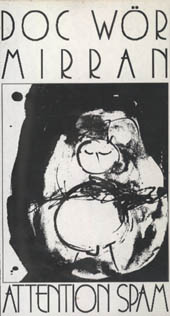 This major release consists of three one hour long cassette tapes packed together in a special cassette box. Recorded 1993 to 1994 when DWM were involved in their first practice room, jokingly refered to as "We've Escaped From The Evil Red Headed Witch Studios", these pieces are more spacey ambient than most DWM work, and mirror the sound of their "Mask" and "Deformed" recordings from the same time. Featuring performances and input from Joseph B. Raimond, Peter Schuster, Adrien Alecu, .mario., Marcel, Michael Asch, Knut Friebel and Helmut Burghart. 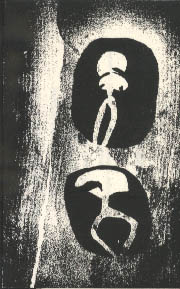 Long before the members of what would later form DWM even knew that industrial, experimental or punk music even really existed, and long before the band name Doc Wör Mirran was thought up in the mid 1980s in San Francisco, they recorded jam sessions in their bedrooms. Recorded in the summer of 1981 when they were still young, alive, and perhaps a bit naive, they recorded this 90 minute tape, their very first recording. Featuring Joseph B. Raimond, Bernard H. Worrick, Frank Abendroth and Jeannette Raimond (later Gustavos), it includes more than a few covers, rare for DWM, in the form of Santana´s "Evil Ways" in several versions, Zappa´s "It Can´t Happen Here", Neil Young´s "Heart Of Gold" and "Tell Me Why", The Who´s "Squeeze Box", The Door´s "My Wild Love" as well as the first version of "Help, We Need A Melody", probably their first ever own song. Not always easy on the ears, and certainly not up to todays musical as well as sound quality standard, this release features a piece of ceramic by Joseph B. Raimond as part of the packaging, and is limited in this form to 50 copies. 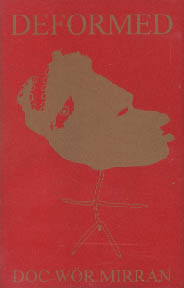 Like "Attention Spam", this hour long tape was recorded live to tape in our shortlived rehearsal and recording space "Smells Like Fischer To Me" studios in the mid 1990s. Again, live ambient improvisations, this time featuring Joseph B. Raimond, Peter Schuster, Adrien Alecu, Michael Asch and Bertram. 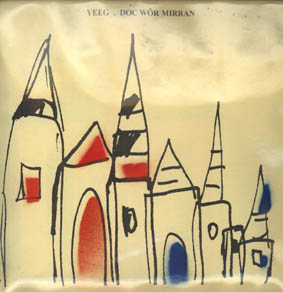 A few years before his death, DWM released this special two hour long opus composed and performed by Frank Abendroth. Always a very enthusiastic member of DWM, due to his time-consuming job and serious health problems, Frank was not able to contribute to DWM as much as he wanted. One dream come true for him though was this release, recorded on his portable four track cassette deck. Song titles are not listed, as there are not any "songs" in that sense. Garage quality pure, but what a fun release! Cover art by Joseph B. Raimond and Jeandra Raimond. Includes a small finger painting as well by Peter Schuster. 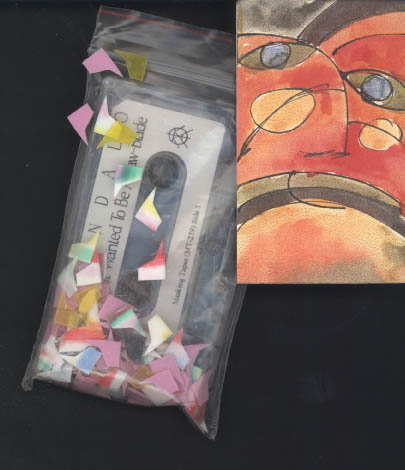